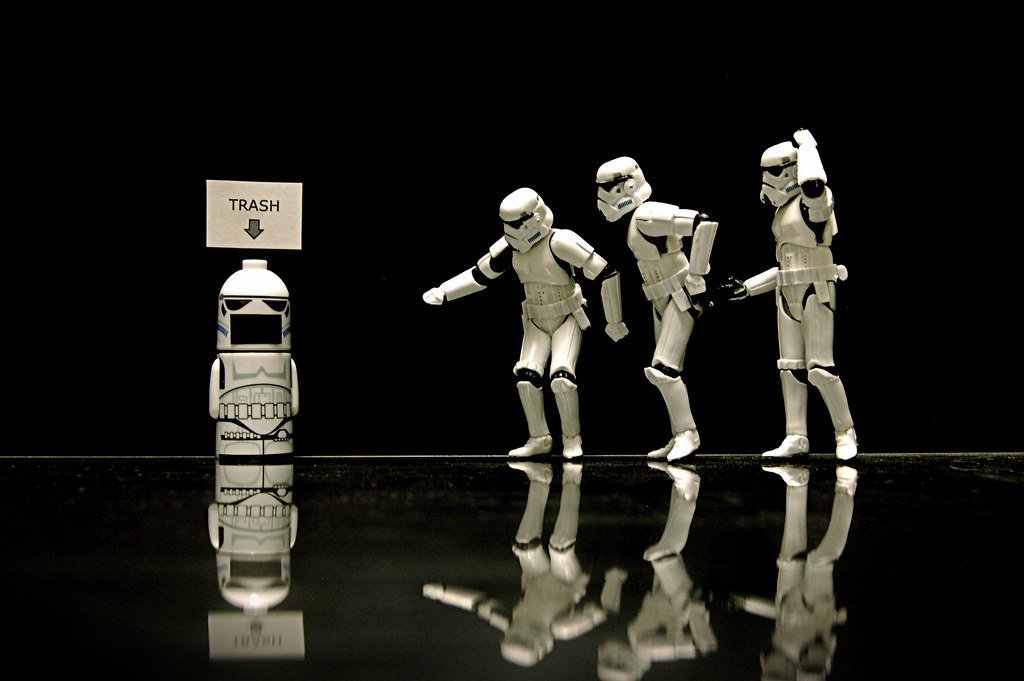 Posted to Flickr on 06 February 2010. Part of the Stormtroopers series. Included in my Portfolio.

The stormtroopers are a little disturbed by the design of the new garbage bins on the Death Star.

The “garbage bin” is actually a slightly modified keyring given to me by my lovely wife Leslie for Christmas 2009. That was the original inspiration for the photo; I thought the keyring looked like a small stormtrooper trash can.

As I played with the figures setting up this photo, I began to think of the stormtroopers as The Three Stooges in a quiet, uncertain moment, so I posed them accordingly:

The opening for the garbage bin, the “mouth,” is actually a piece of rectangular black paper that I taped over the real mouth. I had originally wanted to create something that looked like a hinged panel with the word “Trash” on it, something more like a real garbage bin, but I was worried that the letters would be too small to read, so I went with a sign above.

These three have also been spotted examining trash cans here:

This photo was posted to Flickr on 06 February 2010. It was one of 500 images featured on Flickr Explore for that day. The last time I checked, it had 16,701 views on Flickr.

Trash Talk by JD Hancock is licensed under a Creative Commons Attribution 3.0 Unported License. Permissions beyond the scope of this license may be available.