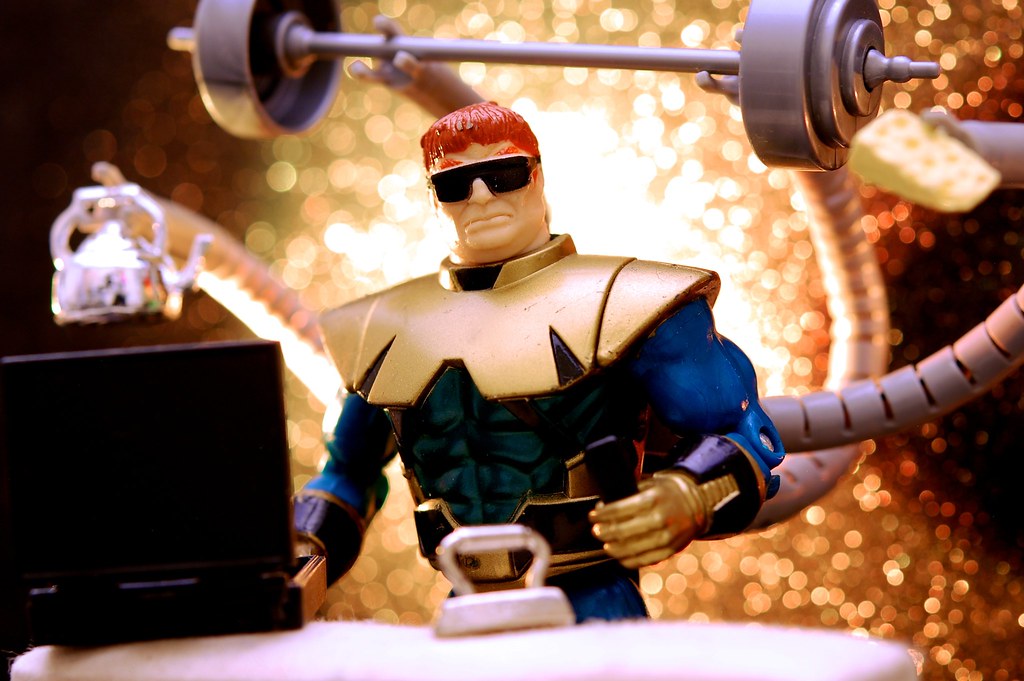 Posted to Flickr on 03 February 2014. Part of the Laugh! series. Funny is fun.™ Included in my Portfolio.

Photo submitted to the Flickr group Macro Mondays for the “Busy” theme.

This photo was inspired by the “Busy” theme of the Flickr group Macro Mondays. After spending some time thinking about what character could visually portray “busy-ness” the best, I decided on Doctor Octopus because of his multiple arms.

Doctor Octopus stands in front of a 12x12 inch sheet of black glitter paper. A colored LED set to yellow shines on the paper behind him. In front of him is a dollhouse-scale ironing board with an iron and briefcase on it. In his mechanical arms he holds a kettle, a barbell, and some cheese. In his left hand he holds a mobile phone.

Above the scene but not visible is a large circular diffuser, diffusing the ambient light in the room.

It is difficult to track Doctor Octopus, but here’s where he’s been spotted:

This photo was posted to Flickr on 03 February 2014. It was one of 500 images featured on Flickr Explore for that day. The last time I checked, it had 54,440 views on Flickr.

High-Octane Villain by JD Hancock is licensed under a Creative Commons Attribution 3.0 Unported License. Permissions beyond the scope of this license may be available.