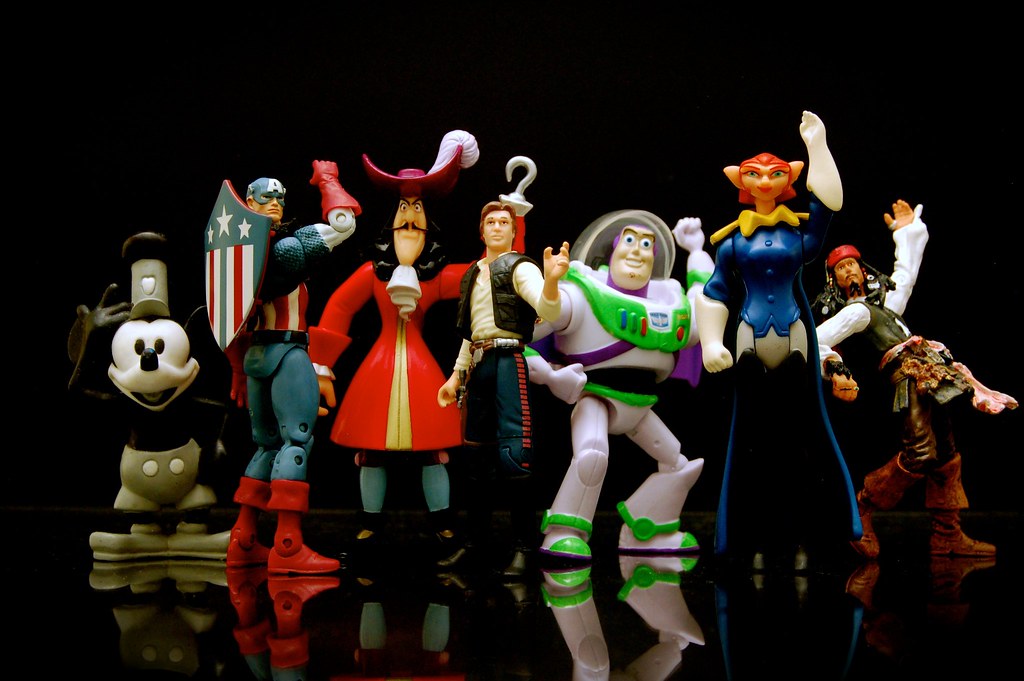 The Court of Disney Captains

Once upon a time there lived seven legendary leaders with amazing adventures and terrifying tales that captured the imagination of generations. Individually, each was an icon who embodied traits often associated with command. But together, they were … the Court of Disney Captains!

Mickey Mouse was first seen by general audiences wearing a captain’s cap and piloting a steamer named Steamboat Willie. In the intervening years the little mouse has commanded a number of aquatic vessels, from tugboats to ships to submarines and more, often accompanied by his friends Minnie Mouse, Donald Duck (a fellow sailor), and Goofy. Today, Captain Mickey journeys with his fans on the decks of the Disney Cruise Line fleet.

In the early days of World War II an experimental serum transformed a frail but patriotic American named Steve Rogers into a living legend: Captain America! Clad in red, white, and blue, and armed only with an almost-indestructible shield, the world’s first super-soldier helped rally support for the Allies and aided the United States military in countless missions against the Axis Powers. He was long thought lost to a watery grave, but his body was discovered frozen and revived in modern times. Once recovered Cap joined the team of superheroes known as "The Avengers" and the law-enforcement and intelligence agency S.H.I.E.L.D. where he serves as soldier, leader, and inspirational icon.

"Thank you, me dear. You’ve been most helpful."

The power-hungry pirate and revengeful ranking rogue of the Jolly Roger, Captain Hook is on a merciless mission to punish the prepubescent Peter Pan and nefariously lord over Never Land. He is thwarted time after time by the simple-minded Mr. Smee and the clever and tenacious Tick-Tock the Crocodile.

"I take orders from just one person: me."

During a period of civil war Han Solo was a galactic smuggler with a fast ship, a good blaster, and a heart of gold. While running from his debts with his Millennium Falcon co-pilot Chewbacca, he became involved with Rebel Alliance against the evil Galactic Empire. Together with Luke Skywalker and Princess Leia he helped destroy two Death Stars, defeat the sinister plans of Darth Vader and the Emperor, and restore freedom to the galaxy. Han Solo is the loner who became a leader.

"I am Buzz Lightyear. I come in peace."

Buzz Lightyear is a space ranger stationed in the Gamma Quadrant of sector 4. As a member of the elite Universe Protection Unit of the Space Ranger Corps, he protects the galaxy from the threat of invasions from the Evil Emperor Zurg, sworn enemy of the Galactic Alliance.

"To infinity and beyond!"

The finest captain in this or any other galaxy, Captain Amelia commanded the R.L.S. Legacy, the ship which carried Dr. Doppler and Jim Hawkins through a tale of thrills and treachery to Treasure Planet. At the end of the voyage, the cat-like commander, together with her heroic passengers, defeated the selfish John Silver and the savage Mr. Scroop. Amelia is a fearless feline female who is intelligent, independent, and intolerant of incompetence on her ship.

The calculating and crooked Jack Sparrow was born on a pirate ship and grew up to make a name for himself as one of the craftiest captains in the Caribbean. Often considered a lucky gambler or looney genius, his (possibly) drunken deceptions have gotten him into trouble as many times as they’ve gotten him out of it. Although he might tell you his favorite thing in the world is rum, the Sparrow’s true loves are the sea, his ship the Black Pearl, and, of course, himself.

"I’m sorry. Could you repeat the question please?"

This photo was a long time coming.

Eventually I had seven diverse captains that I felt represented the many different aspects of Disney. Although I list their characteristics in the photo description, I would also like to document how I see each character reflects my views of Disney storytelling.

Captain America symbolizes Disney’s recent and powerful entry into the world of comic book super-heroes. Disney has created super-heroes for many years, like Condorman, Darkwing Duck, and The Incredibles, but the dense catalog of Marvel superheroes will keep the company busy and audiences entertained for many years to come.

I wanted at least one villain on the list, and Captain Hook serves that role well. He’s not such a nasty guy that he would be out of place with the others, but he’s certainly a classic bad guy. Hook symbolizes Disney traditional animation at its peak, when the company boasted a mature and respected animation house, consistently turning children’s literature into movie magic.

I was thrilled when I discovered I could add Han Solo to the list. By acquiring LucasFilm, Disney became the caretaker of Star Wars, and the importance of that role both from a cultural and a historical standpoint is difficult to overstate. Han Solo symbolizes Disney’s willingness to acquire, protect, and nurture significant creative endeavors that did not originate from within its walls.

The relationship between Disney and Pixar is symbolized by Buzz Lightyear, one of the 3D animation juggernaut’s first and still most popular characters. As a kid I always thought 3D animation would be the future of children’s entertainment, and while it hasn’t completely taken over (and probably shouldn’t in retrospect), it is certainly an important aspect of Disney.

In a list that was turning into a boy’s club, I am happy I was able to include Captain Amelia from Treasure Planet. As a captain on this list she symbolizes the alien outsider, the exception to the rule, a well-crafted female character who isn’t a princess in love with the leading man.

An early name on the list, Captain Jack Sparrow is a no-brainer. He symbolizes the tradition of live-action Disney heroes in the past and the fun of the Disney parks.

And of course once the list was completed, I had to fill in the gaps, acquiring figures of the captains that were missing from my collection.

The initial setup was easy: the black backdrop of foam board, the sheet of acrylic on my elevated black shelf, and a large circular diffuser, softening the ambient light in the room. 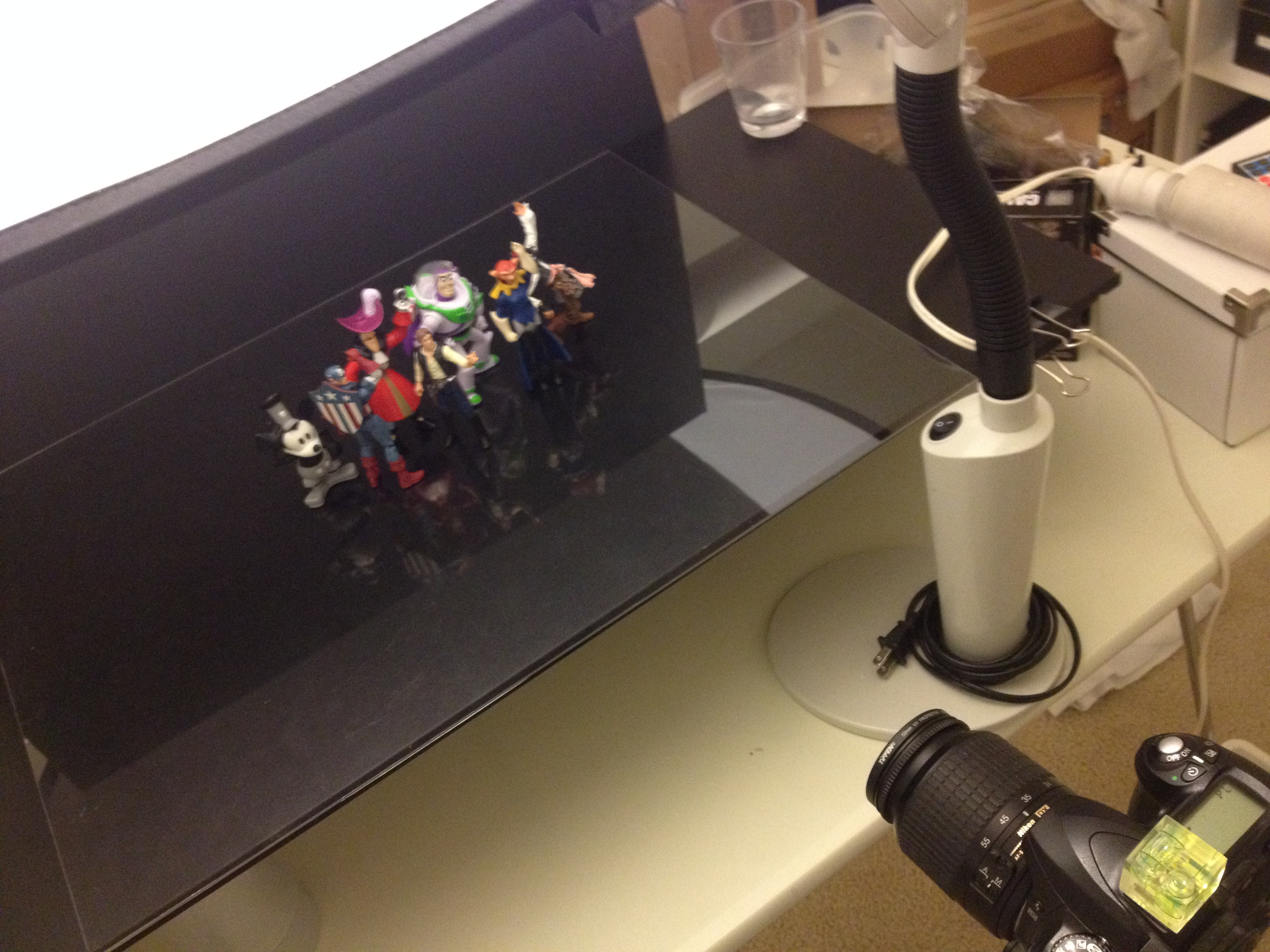 Staging the captains themselves was difficult. I spent a long time thinking and rethinking their poses, and even after all of that planning I still went through several iterations before I found one I liked. Also some of the figures would topple when I tried to adjust them. In a setup where the toys are positioned so close together, one figure falling over can be a big deal.

My initial photos had a similar general composition, but the figures were posed differently. 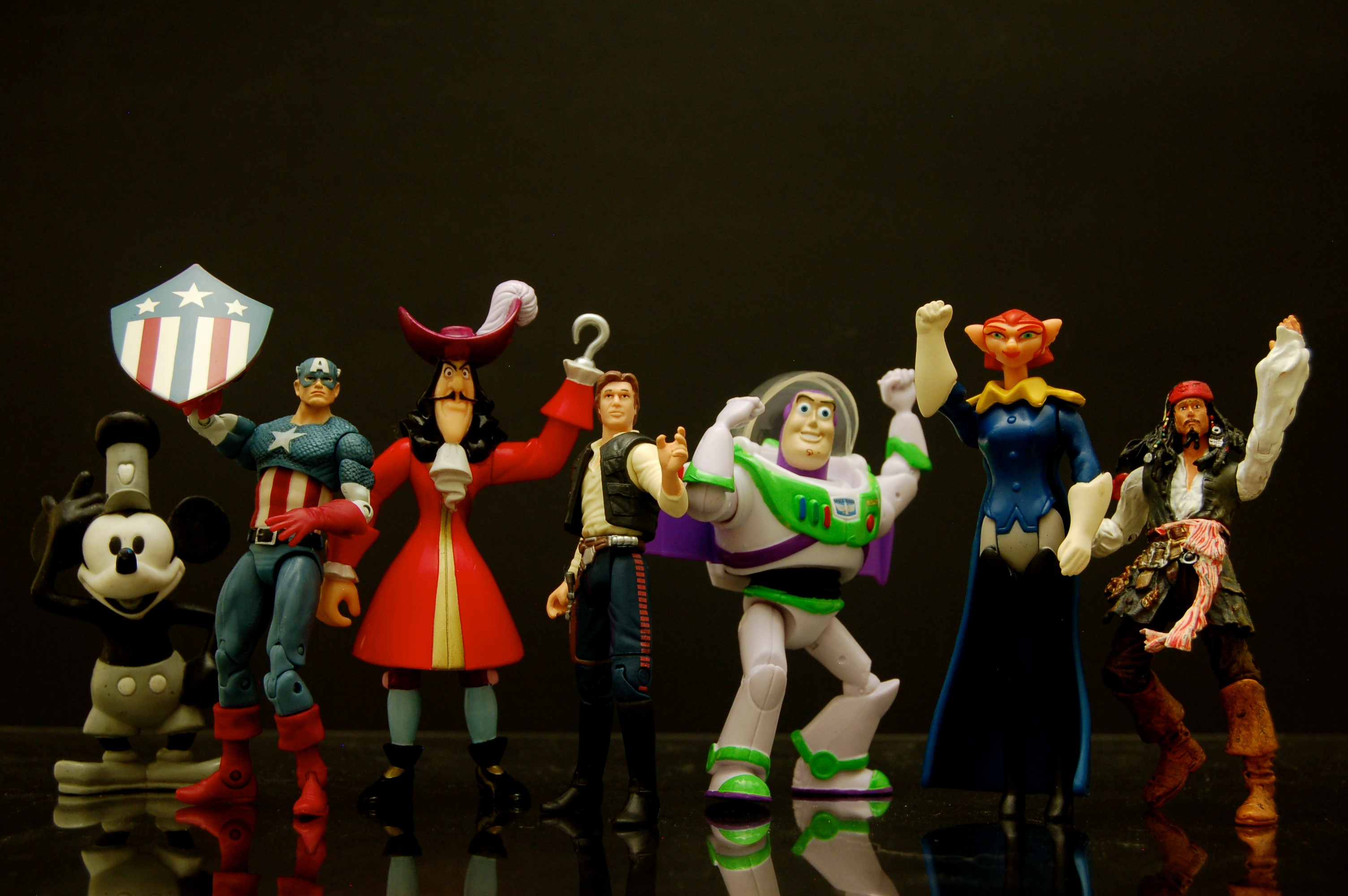 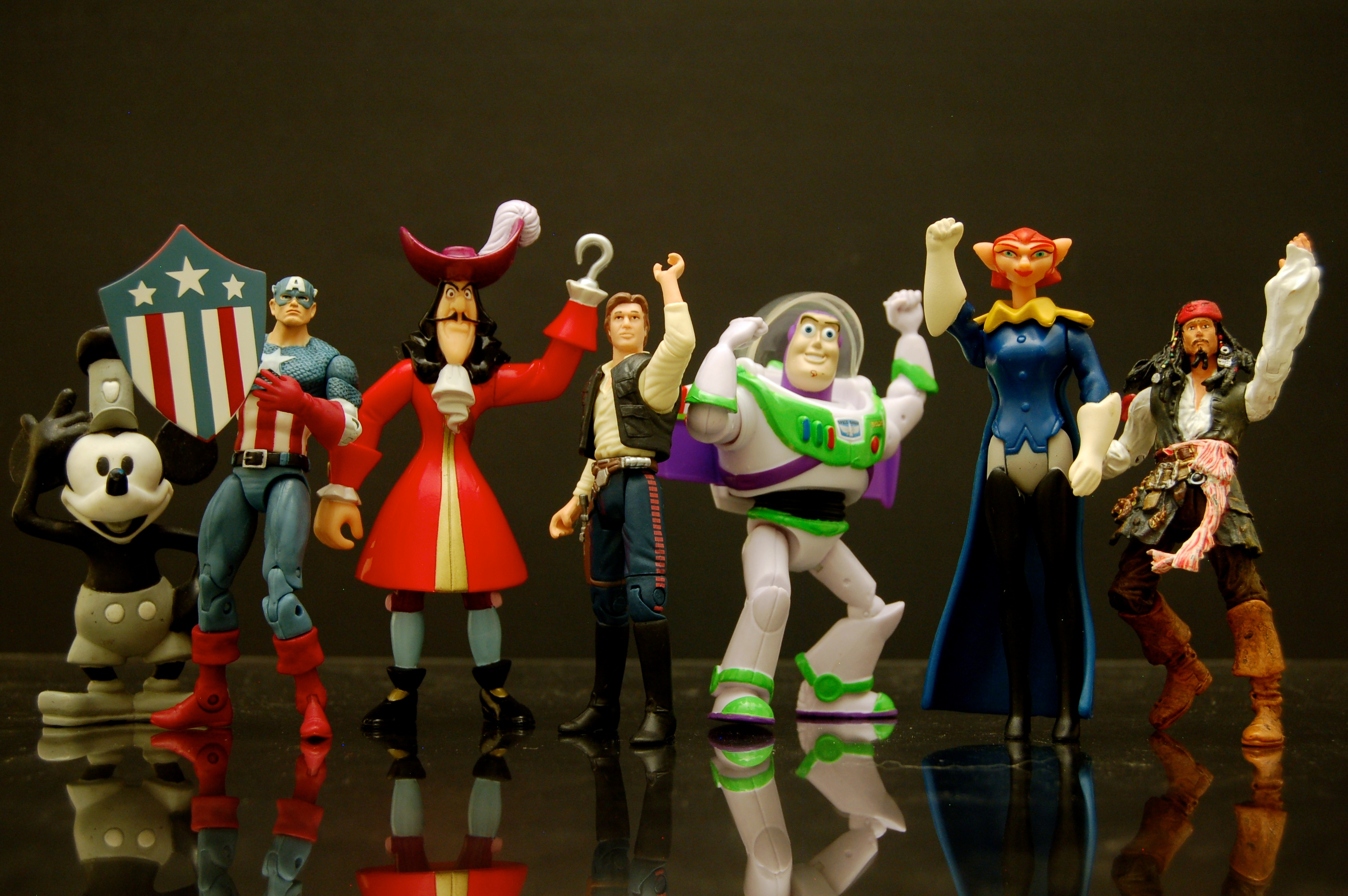 The Court of Disney Captains has also been spotted here:

The Court of Disney Captains by JD Hancock is licensed under a Creative Commons Attribution 3.0 Unported License. Permissions beyond the scope of this license may be available.