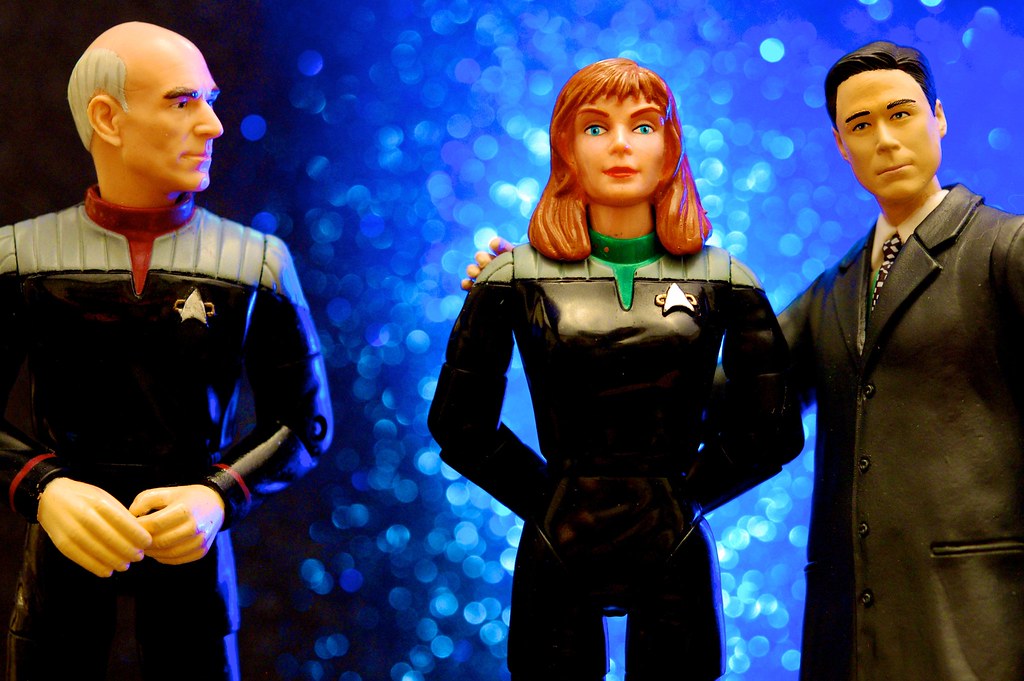 It seems Dr. Crusher of the U.S.S. Enterprise has the interest of Wesley Wyndam-Pryce, Watcher of the vampire slayer.

I have two people to thank for helping make this photo happen. First is Thomas Salazar, my childhood friend from an alternate timeline who was nice enough to send me Wesley several years ago. The other person is Emily, who encouraged me to photograph the Wesley figure after all these years. This photo is dedicated to both of them.

Of course in the television series Star Trek: The Next Generation Captain Jean-Luc Picard and Dr. Beverly Crusher had a might-they-get-together sort of relationship. So in a photo referring to Jean-Luc, Beverly, and Wesley, one would assume “Wesley” is Dr. Crusher’s son Wesley Crusher. But in this case he is actually Wesley Wyndam-Pryce from the Buffy: The Vampire Slayer and Angel television series.

In early 2011 after I finished my Duel 365 photo series, a childhood friend from an alternate timeline named Thomas Salazar sent me a couple of action figures for a duel he came up with, and one of them was Wesley Wyndam-Pryce. It was a great idea, but Duel 365 was over, and unfortunately I didn’t have enough duels lined up for another series. So his figures went into storage, waiting for the next duel series.

And Wesley might still be in that box, except recently, a student from Australia named Emily contacted me to ask about my photography, and when she learned I had an unphotographed Wesley Wyndam-Pryce figure, she eagerly requested that include him in an upcoming photo. And since he had been stored away for so long, I decided she was right.

The setup for this photo was straightforward. The backdrop is a sheet of black glitter paper. A colored LED bulb (far right) is pointed at the backdrop through a toilet paper roll. I manually held a small LED flashlight with cardboard wrapped around the end and aimed it at the area behind Dr. Crusher for added bokeh goodness. 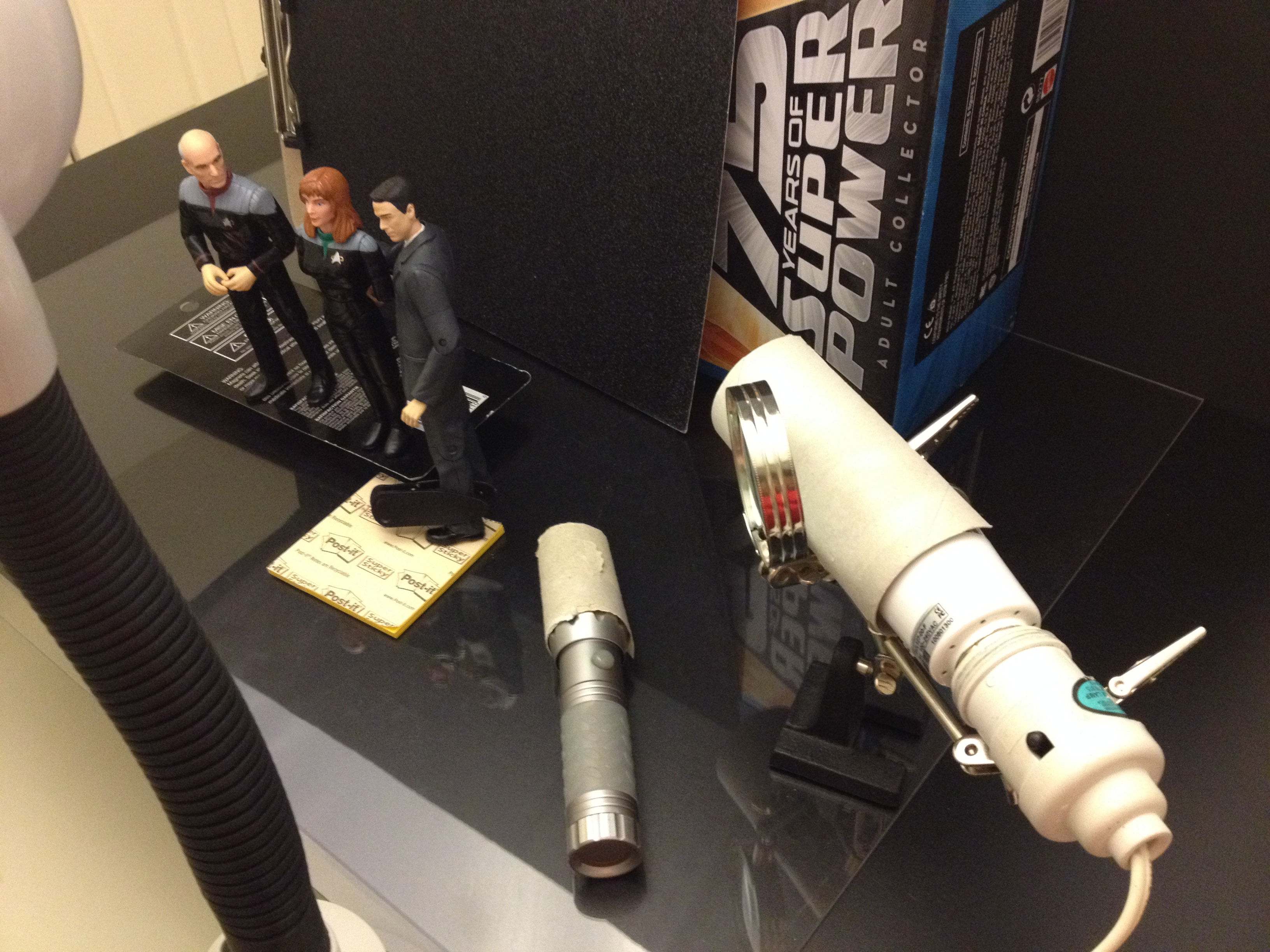 Since the figures are at slightly different scales, I stood the Star Trek characters onto a package of magnetic letters. And since Wesley’s head is positioned at a downward slant, I compensated by leaning him backwards with one foot propped on a pad of sticky notes.

Above the scene but not visible in the setup photo is a large circular diffuser, which softens the ambient light in the room.

I played around with other secondary light sources but decided in the end that the focus should be on Dr. Crusher. 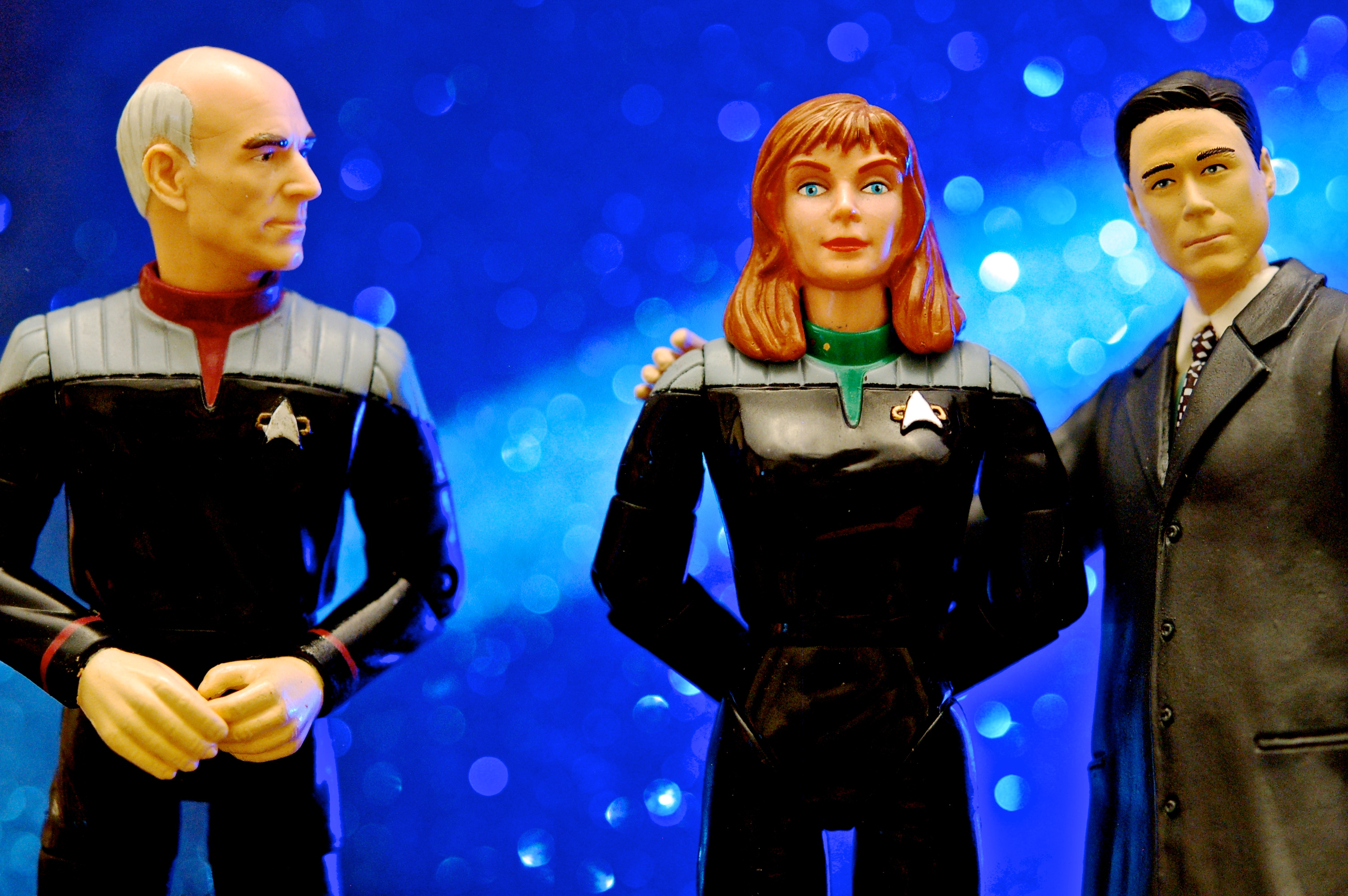 Jean-Luc, Beverly, and ... Wesley?! by JD Hancock is licensed under a Creative Commons Attribution 3.0 Unported License. Permissions beyond the scope of this license may be available.