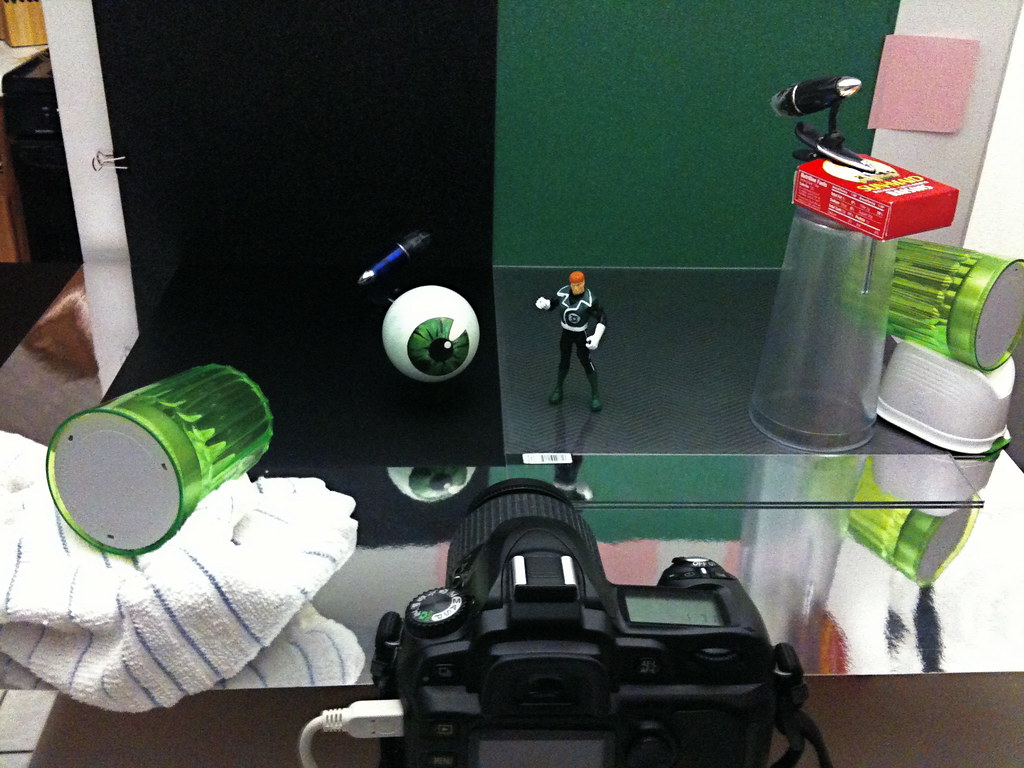 This is the setup photo for Emerald Eye Of Ekron vs. Green Lantern Guy Gardner.

The Eye is mounted on a small, black plastic bottle top that blends into the black paper beneath it. I had originally wanted to hang the Eye from above with a reflective surface underneath, but the Eye is heavy, and I didn’t see a good way to hang it securely without damaging it. In fact, you can see that on the "stage" underneath them I had a nice, reflective surface set up for it.

The Eye is backlit with a push-LED shoved into the top of a green plastic cup which is sitting on a dish towel. Guy is backlit from three sources: a second push-LED shining through a green plastic cup and two clip-LEDs shining through green glass tokens scotch taped to their fronts. Guy’s push-LED-in-a-glass is mounted on a snack-sized potato chip container flipped upside-down. The high clip-LED is mounted on a red raisin box that’s sitting on a clear plastic cup. The low clip-LED is actually positoned behind the Eye, but it’s placed so that the camera can’t see it.

A large circular diffuser (not shown) sits above the scene and softens the ambient light in the room. A strip of dark fabric (not shown) is positioned just above the backdrop to darken it and enhance the backlighting.

Emerald Eye Of Ekron vs. Green Lantern Guy Gardner Setup by JD Hancock is licensed under a Creative Commons Attribution 3.0 Unported License. Permissions beyond the scope of this license may be available.