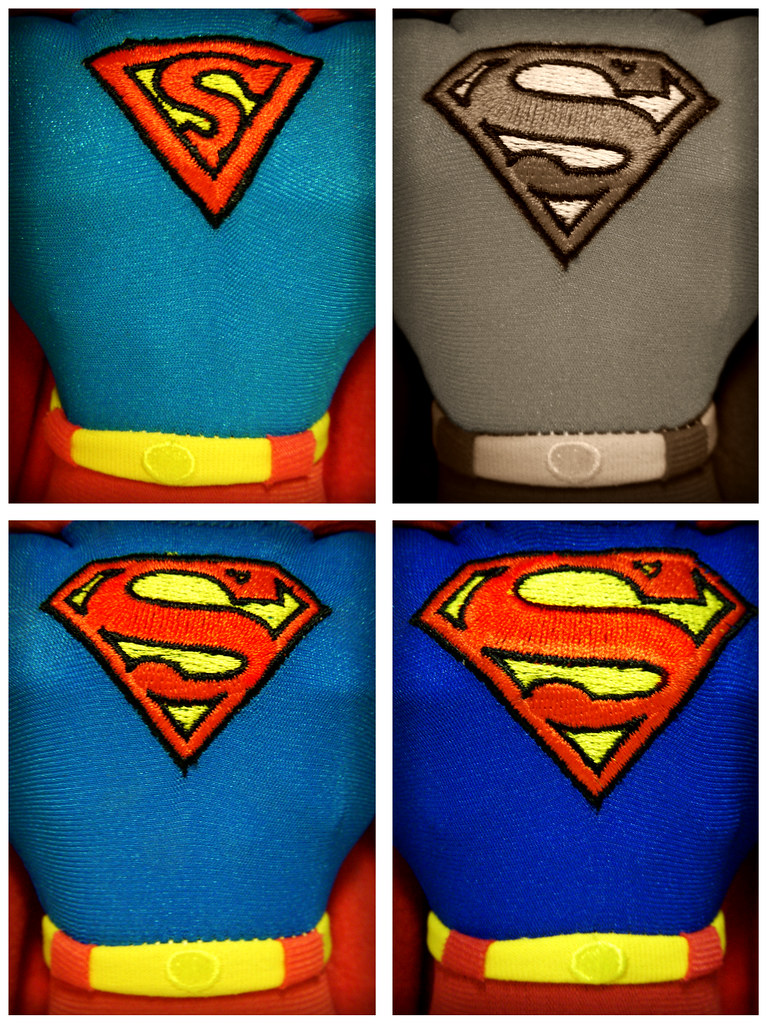 Superman and his iconography have captured the imagination since his first appearance in Action Comics #1 in June 1938. He has undergone many incarnations over the years, appearing in virtually every form of media that exists. This collage provides four snapshots of Superman’s costume, each one representing a different time and place in his history.

Image 1. Superman wore this triangular "S" shield and several variations of it in early Superman comic books of the 1930’s. Although relatively primitive, even this shield is not the original. Superman’s first symbol was shaped like a literal shield with a very simple "S" in the center.

Image 2. In the 1950’s George Reeves, star of The Adventures of Superman television series, was the first "real life" Superman for many people. In the early years of the show Reeves wore a brown, grey, and white costume so that the colors would appear correctly on viewers’ black-and-white television sets. The shield shown here is more angled than the one actually worn by Reeves.

Image 3. From the mid-1950’s through the mid-1980’s, Superman’s costume remained relatively unchanged. For three decades it was seen in this style and coloration in comic books, animated television series, and movies.

Image 4. In the mid-1980’s DC Comics revamped the Superman comic books, and the character was given a much larger shield that nearly covers his chest. In the intervening years, the blue portions of Superman’s costume have taken on a darker hue, as seen in print, on television, and in film.

The media type of this image is "photo." The original file type was "jpg." The photo's dimensions are 768 x 1024, giving it portrait orientation.

Yesterday's Man Of Tomorrow by JD Hancock is licensed under a Creative Commons Attribution 3.0 Unported License. Permissions beyond the scope of this license may be available.